Reliably filter out accumulations of aerosol from the room air! Our professional high-frequency air cleaners provide clean air for breathing

Operators of fitness studios, restaurants, department stores, shopping malls and retailers of all kinds know the problem well enough: depending on season and temperature, there is stagnant air in the rooms, even with the ventilation system activated. The breathing air is additionally polluted with suspended matter, e.g. dust particles, nitrogen oxides and formaldehyde, but also with invisible pathogens like viruses and bacteria. The latter particularly enter the respiratory tract or the pharynx where they start to spread. Eventually, they will be emitted to the surrounding air through tiniest saliva particles as they occur upon speaking, coughing or sneezing. Such conditions are a challenge for the health of employees, customers and guests, but also strain the immune system. Not to mention the danger of becoming infected with coronavirus through airborne aerosol particles. 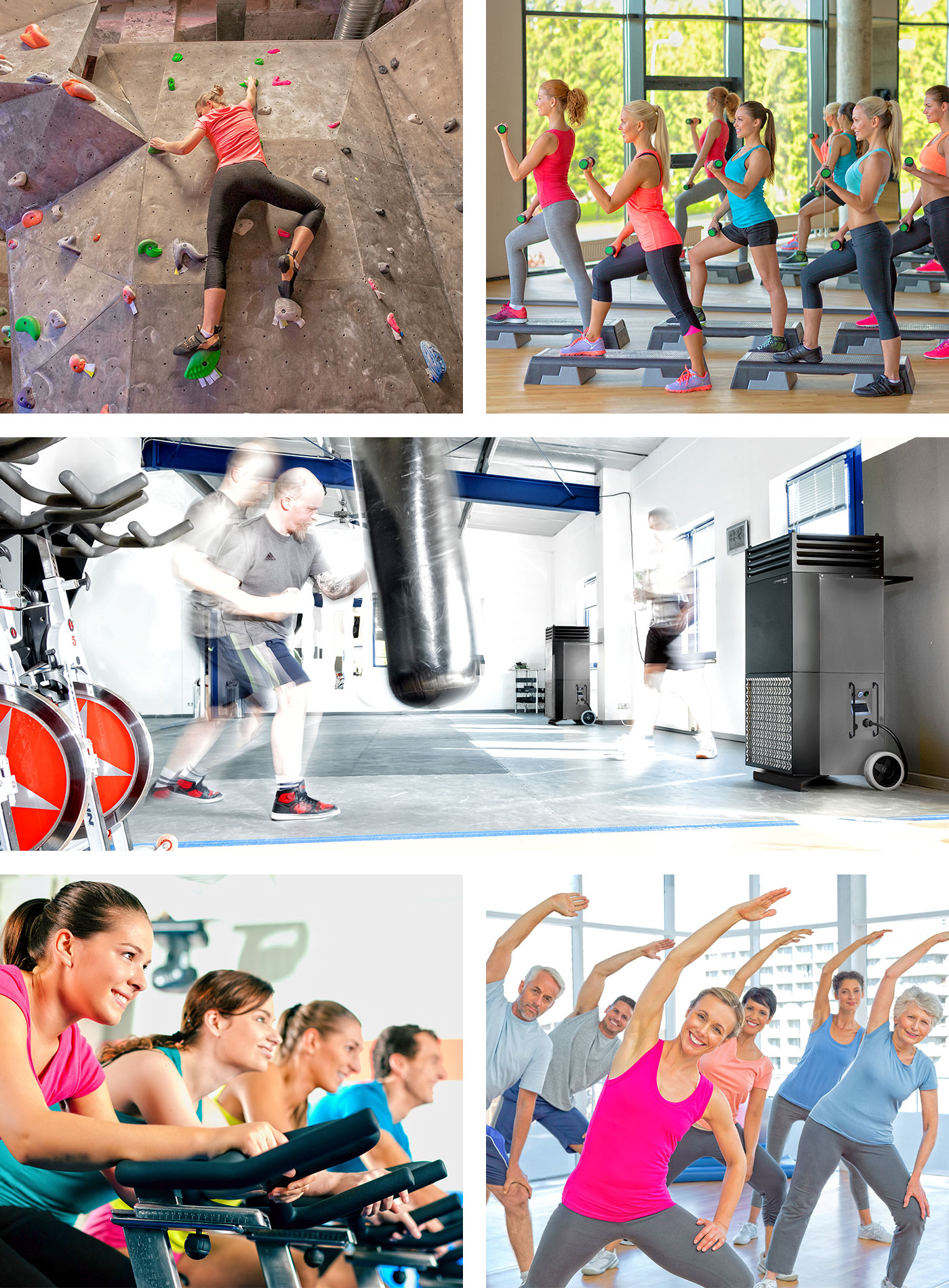 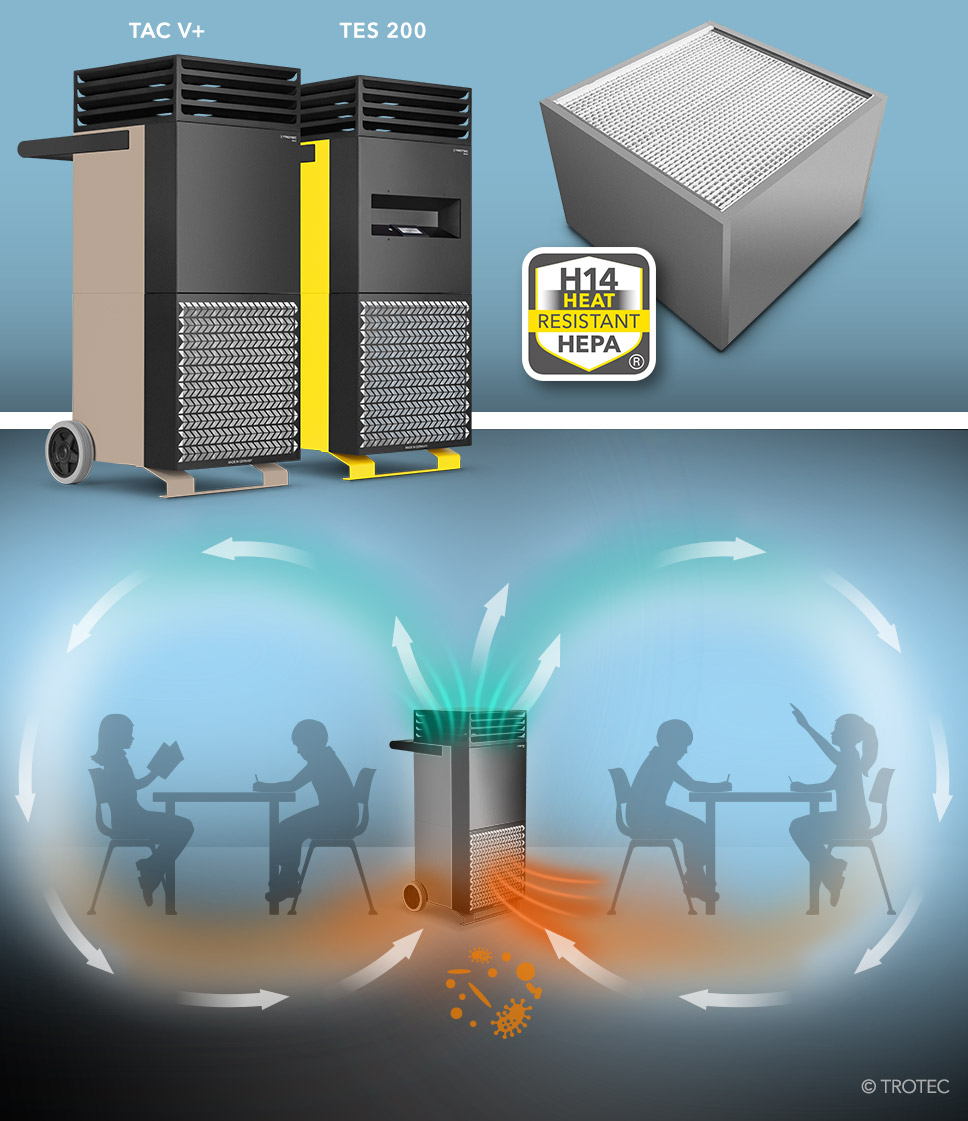 Prevent the gym from becoming a ‘virus spreader’

Scientific studies prove that e.g. the SARS-CoV-2 virus can survive in the air for several hours in form of a particulate while remaining infective. Other airborne pathogens overcome even large distances – chickenpox and measles are only two examples. The more people absolve their training in a room at the same time, the higher is the danger of pathogenic germs, viruses and bacteria spreading through the air exchange in the entire training zone.

Wherever many people exercise together while sweating and maybe lifting weights in groups, there is an increased risk to become infected by inhaling airborne pathogens hazardous to health.

The problem of freely floating aerosols with viruses being attached to them is exactly what it is: They are floating! Protective screens or separating walls alone, e.g. installed in-between the individual training stations, do not prevent viruses from spreading through the air. Separating walls made of Plexiglas, similar constructions and also protective masks for mouth and nose indeed protect from direct ‘virus drizzle rain’’ caused by certain manners of talking. However, they do not provide protection from many germ-laden aerosol particles that are released into the room air because of the fitness studio visitors breathing more heavily. For several hours, the particles will eventually continue floating in the air in the form of aerosol accumulations.

Airborne viruses are not familiar with social distancing rules

Combining the use of masks and separating walls is a first important approach to reduce the risk of a direct droplet infection with the SARS-CoV-2 virus. However, this measure does not protect from a far greater danger of infection – accumulations of aerosol particles floating freely in the room air!

Even talking persons emit both large visible droplets as some sort of ‘virus drizzle rain’ and, on a much larger scale, tiny aerosol particles, invisible to the eye and contaminated with viruses or bacteria if from infected persons.

This invisible danger is multiplied when exercising: If the training workload increases, the breathing frequency will also rise. With every exhalation, further aerosol particles are released into the room air. If only one person in the room becomes infected, the gym owners risk their training rooms to be closed again by the respective authorities – even if the studio had just been opened.

Aerosol accumulations spread like billows of smoke, only invisibly

The accumulation of aerosol consists of simultaneously emitted microfine droplets, comparable to billows of smoke. The particles will spread for several metres up and far across the room which is why they overcome physical barriers of sneeze guards barriers or separating walls with no problem. As a result, they can get that easily into the respiratory tract and eyes of other people staying on the other side of the separating wall.

Only a coordinated all-round solution with a direct sneeze guard barrier or a separating wall and additional high frequency air purification reliably and permanently reduces the risk of infection. For this reason, don’t only rely on physical barriers such as protective masks for mouth and nose and separating walls for protecting your employees, members or visitors.

Aerosol particles in the room air don’t stick to the distance rules – as they potentially transport viruses, they are the real source of danger! This is why the main objective is to prevent breathing air of all exercising persons from spreading throughout the room.

Our recommendation for virus filtration in gyms, indoor training and health care facilities 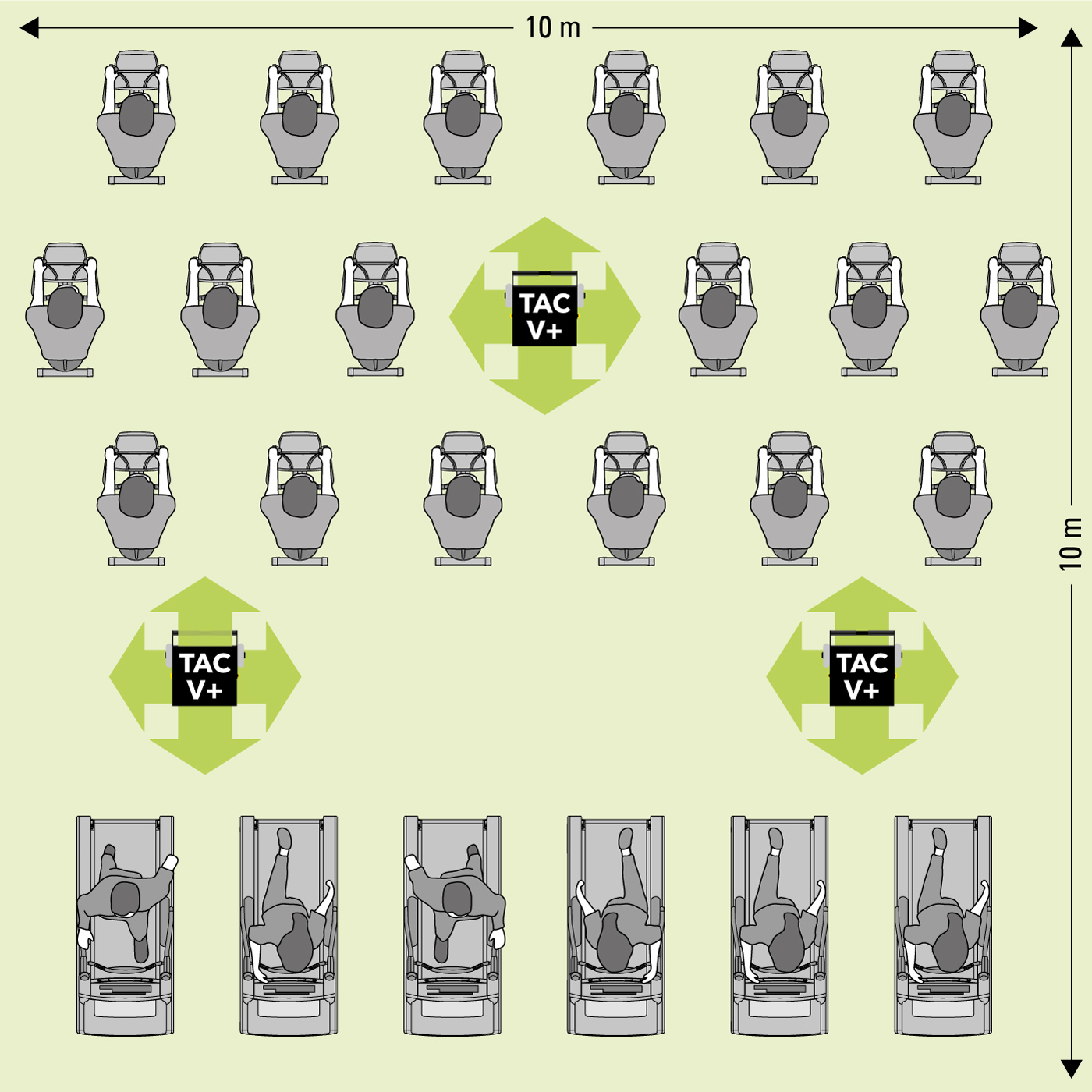 Example ‘fitness studio’: With an area of 10 x 10 m and a room height of 3 m, the depicted training zone has an air volume of 300 m³. Three TAC V+ devices are able to circulate this volume more than 12 times per hour (ventilation performance 3,600 m³/h), which corresponds to an air change rate (ACH) of 12.

The vertical construction of the mobile high-frequency air cleaners TAC V+ and TES 200 serves for establishing particularly efficient “Clean air zones” with surrounding air filtered from viruses. Setting up several devices with some distance in-between will provide areas filled with clean air serving as both passage zones or training, relaxing or waiting zones with a low aerosol concentration.

The one who exercises, exhales more forcefully. This breathing air is the reason how aerosol particles that carry viruses attached to them get into the surrounding air. Freely floating in the room air, they continue to present a high risk for several hours.

By deliberately positioning several high-frequency air cleaners of type TAC V+ or TES 200, patients, members, trainers, course instructors and other employees will be way better protected from suddenly appearing droplets and accumulations of aerosol particles in cash, service or training zones. Due to the high air change rate, the particles will be filtered out within the shortest time. Besides, areas will be permanently filled with large amounts of virus-free room air which will significantly reduce the risk of infection in the “Clean air zone”.

This air cleaning performance is made possible by a synchronous system of efficient prefiltering and final particulate air filtration, provided by the integrated H14 HEPA filter by Trotec in a special heat-resistant version. This special filter is integrated in the devices TAC V+ and TES 200 and is heated up in intervals which will inactivate all viruses remaining in the filter, serving for a 100 % decontamination of the filter.

TAC V+ and TES 200 are part of the same assembly and therefore provide the identical fan performance and HEPA air purification function. Along with the HEPA air purification, the TES 200 can, however, also be used for combined room heating, thermal decontamination of rooms and surfaces and thermal pest control. The reason for this are the additionally integrated, powerful electric heating module and enhanced programming options for various air treatment scenarios.

Thanks to their special combination of filter and decontamination technology, TAC V + and TAC XT safely reduce the risk of airborne infection in all areas with high levels of public traffic – ideal for fitness studios, training and health facilities or indoor sports facilities and rehabilitation centers.

1 2 3 4
10% OFF YOUR FIRST ORDER
Subscribe now to get your discount coupon code. Don't miss out!
SUBSCRIBE
I agree with the Terms & Conditions
We will never spam you, unsubscribe anytime.